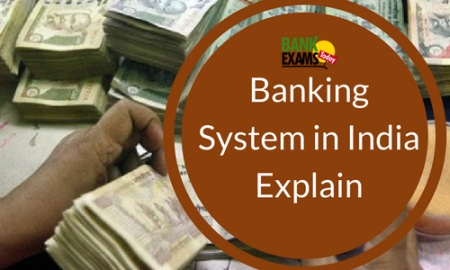 In the surcharged atmosphere of Swadeshi Movement, a number of private banks with Indian managements had been established by the businessmen from mid of the 19th century onwards, prominent among them being Punjab National Bank Ltd., Bank of India Ltd., Canara Bank Ltd, and Indian Bank Ltd. First bank with fully Indian management was Punjab National Bank Ltd. established on 19 May 1894, in Lahore (now in Pakistan).

B. Nationalization of Banks and the Banking Sector Reforms, from 1969 to 1991: The number of banks in India in 1951 were the highest – 566. In 1960, RBI was empowered to force the compulsory merger of the weak banks with the strong ones. This led to reduction in the number of banks to 89 in 1969.

On April 15, 1980, another six banks were nationalized, and thus raising the number of nationalized banks to 20.

C. New Phase of Indian Banking System, with the Reforms After 1991:On the suggestions of Narasimha Committee, the Banking Regulation Act was amended in 1993 and thus the gates for the new private sector banks were opened.

In 1993, New Bank of India was merged with Punjab National Bank. “Industrial Development bank of India (IDBI)” – was established as a Development Bank in 1964 – by an act of Parliament. It was given the status of a scheduled bank in September 2004 by RBI.

Bharatiya Mahila Bank Ltd – all women’s bank was established in 2013. It is based in New Delhi. Its first branch started its operations on November 19, 2013. Inauguration was done by former Indian Prime Minister S. Manmohan Singh.

The present structure of Indian Banking System is as follows:-

Reserve Bank of India is the central bank of the nation and all Banks in India are required to follow the guidelines issued by RBI. The present structure includes:

These include:
Currently, there are 27 Public Sector Banks in India including 19 Nationalized Banks (14+6 – 1 New Bank of India merged with PNB in 1993 + SBI which is not a nationalized bank + Five Subsidiaries of SBI + IDBI + Bharatiya Mahila Bank – established under Parliament of India Acts).

Regional Rural Banks (RRBs): Previously these were 196 Regional Rural Banks sponsored by 27 State Cooperative Banks. As on 31st March, 2013 due to mergers their number has come down from 196 to 64. The numbers of branches of RRBs are 17856 as on 31 March 2013 covering 635 districts throughout the country. Notably, currently there are 664 districts in India.